Earlier this year, Nokia confirmed that it will return to the smart phone market in 2016.

Technology Web site nokiapoweruser has exposed a suspected Nokia will launch a new machine - Nokia C1-- renderings, the website that it could not determine the authenticity of the picture, because it is by far the inflow of public view debut picture related to C1.

The Finnish gods of rebirth have sent an omen – live photos of the Android-powered Nokia C1. To be clear, that's Nokia Nokia, not the Microsoft sub-division. The handset looks pretty much just like the renders we saw earlier.

Interestingly, the screen is now reported as 5" 1080p, rather than 720p, which was the original rumor. Also, it allegedly runs Android 6.0 Marshmallow (pretty vanilla by the looks of it) on an Intel Atom chipset (with 2GB of RAM). From the photos it's still not clear if the phone is made of metal or plastic.

Of course, the phone won't come out until next year. That's when the company is scheduled to make its return to the phone business. However, R&D and manufacturing will be based in China. 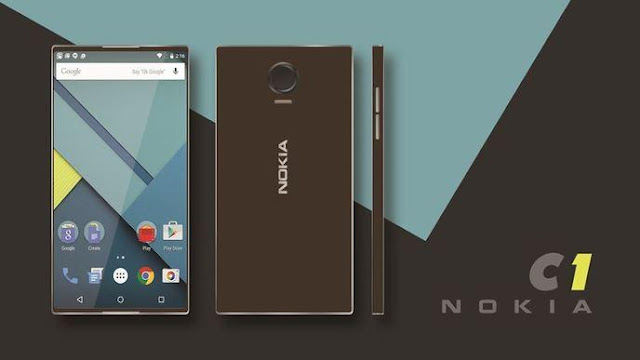 The new mobile phone product code of Nokia C1, according to foreign media reports, Nokia C1 will have two versions, powered by Android 6.0 and Windows 10 mobile systems (WP 10), while in the configuration will be powered by Intel Atom processor, 2GB RAM with a 5-inch 1080p screen.

Since Microsoft in early 2014 price of $ 7.2 billion acquisition of its equipment and services, Nokia has not produced its own mobile phone. Nokia confirmed that this year will return to the smartphone market.